Iulia is recognized in Sallu group. Salman and Iulia have been seen together in many places. 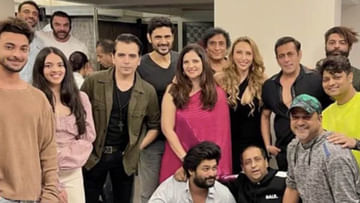 The news that Bollywood actor Salman Khan is dating Romanian singer Iulia Vantur has been doing the rounds since earlier. However, neither Salman Khan nor Iulia have broken their silence on this matter. Now the new video has gone viral. Salman Khan and Iulia are seen together in this video. Fans are talking that the two are definitely dating.

Iulia is recognized in Sallu group. Salman and Iulia have been seen together in many places. On Sunday (July 24), Salman Khan celebrated Iulia’s birthday with a bang. The family was also present at this time. Sohail Khan, Ayush Sharma, director Sajid Ali etc. have appeared.

Yulia shared this video on Instagram. He expressed his happiness for making such a special birthday celebration. According to sources, Salman Khan and Iulia have been dating for a long time. Fans are asking for the marriage of both of them. Iulia has given voice to the song ‘My Chala’ along with singer Guru Randhawa. Salman Khan and Pragya Jaiswal have acted in this song.

We have detected that you are using extensions to block ads. Please support us by disabling these ads blocker.